What Is Dropbox and How Does It Work? 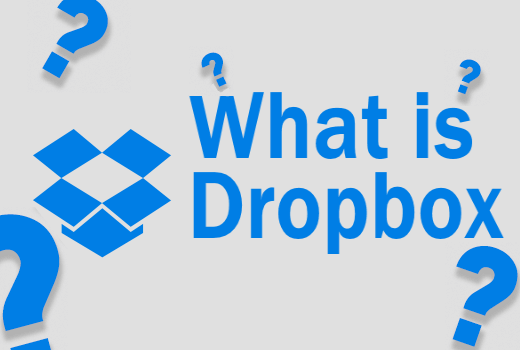 Dropbox has one major difference from computer file managers. One is that you can share the files and folders with a link. That’s because Dropbox files are stored online in the cloud. You can access its files and folders from Windows and Mac computers and mobile devices.

How Dropbox Differs from Windows File Explorer and Apple Finder

Like File Explorer and Finder, Dropbox lets you search for files, create folders and subfolders, and move files using drag and drop. Because Dropbox is in the cloud, you can also share files and folders with other people. They can be located anywhere. They can access Dropbox files from anywhere using any device as long as it’s their files or someone shares it with them.

You can’t share files found in Windows File Explorer and Apple Finder. That’s because files are stored on a local hard drive. The only way other people can access those files is if you give it to them. You can do this by emailing them the file, saving it on a USB drive and handing them the USB drive, or uploading it to a file sharing service like Dropbox or Google Drive.

You can access Dropbox via a web browser like Google Chrome, Mozilla Firefox, or Microsoft Edge. Or you can manage Dropbox through its iOS or Android app. A third option is to download the Windows and Mac Dropbox desktop app.

The storage service does not require installing the app anywhere to access your files. Regardless of the option you choose for accessing Dropbox, you’ll need to log in. Regardless if you use the Dropbox desktop app or visit dropbox.com in your web browser, you can access the files and folders on your phone or from another computer. All you need to do is log in.

Back up Files with Dropbox

The free version of the Dropbox account most likely does not have enough space to back up an entire drive. But you can back up important files. Its desktop and mobile apps can automatically upload photos and videos from a phone, camera, or SD card. When a user saves a file locally, Dropbox can automatically update its version.

Users can recover accidentally deleted files as long as the deletion occurred within the last 30 days. Another feature it offers is version history. If a user needs to switch to an earlier saved file, Dropbox keeps versions that are up to 30 days old. It’s possible to extend the file recovery and version history to 180 days by upgrading to a paid plan.

Dropbox does not behave like a typical online backup service. One important thing to note is that once you delete a file from Dropbox, it deletes the file from everywhere. However, if the user wants to restore a deleted file, it’s possible if you deleted the file within the last 30 days. Or for paid plans, you have up to 180 days to recover a deleted file.

Ever have a time when you try to email someone a large file and the email app says it’s too large? This forces people to either save the file to a USB drive or use an uploading and sharing service for big files. Those services may not be secure. It can take a long time to upload and download the file because the prioritize queues based on free vs. paid accounts.

A storage platform like Dropbox can handle large files. They also offer detailed security options for a free Dropbox account including two-step verification for security. The service has a security checkup to guide users through their preferred security options.

The other collaborators don’t need to have a Dropbox account to view and edit the file. The service creates a link that only people with the link can access the file. Link sharing allows people to preview any one of 175 file types without opening it. File previewing does not require special software or the Dropbox app.

Dropbox for the Desktop

All files in the Dropbox folder are in the cloud rather than saved to the local hard drive. You can drag and drop any file on This PC over to Dropbox. This puts the file in the cloud. You’ll be able to access it from anywhere.

Signing up for Dropbox is free. Users receive up to 2 GB of storage. To gain more space and features requires upgrading to one of its paid plans. The price varies by Dropbox plan. Typically, the largest difference among plans is the storage space and available features.

Users can pay for Dropbox on a monthly or yearly basis. Yearly is cheaper because you pay upfront for a year’s worth of service. All plans include 256-bit AES and SSL/TLS encryption, anywhere-access, desktop app, and sharing.